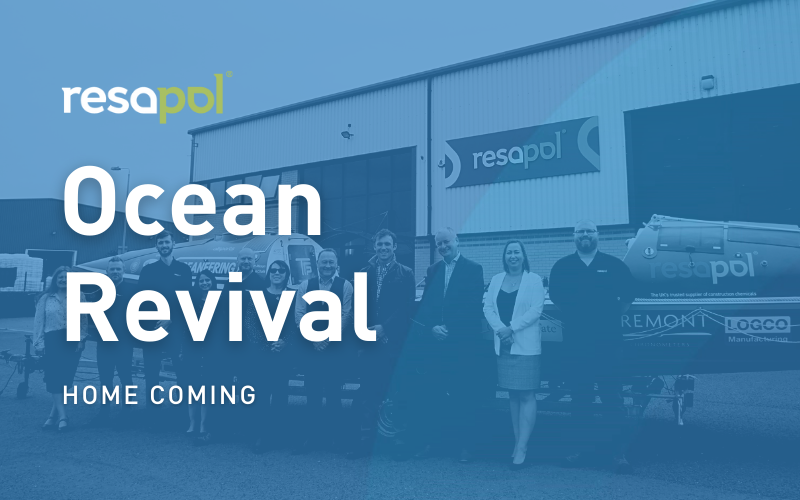 So after almost 3 years of planning, multiple setbacks and 72 gruelling days at Sea, on the 11th August the Ocean Revival Team became the first people in history to row from New York to London! They battled through some ferocious weather systems, huge ocean swells and endured everything that Mother Nature could throw at them. Matt Mason, a member of the rowing team reflects on how they started out “Ocean Revival Adventures initially started with 3 focusses; the first was to be the first team in Human history to row from New York to London, 4000 miles of sleep deprivation, rapid weight loss, North Atlantic storms and pretty horrific conditions to name a few. The second was to set up an education programme, visiting Schools in the UK to inspire and discuss children to change the way we do things, especially from a single use plastic perspective. Finally, the third, was to raise over £50,000 for our two charities, Ocean Generation and The RMA – Royal Marines Charity.”

The Ocean Revival team themselves were made up of serving and former Royal Marine Commandos, and having fought alongside each other they decided their next battle should be against plastic in the Ocean by completing the most dangerous ocean row. Plastic in our Oceans is a huge problem that has a devastating effect on our ecological systems. According to Science Journal, 12.7 million tonnes of plastic enter our oceans every year which effects Marine life as well as the oceans food systems.

Matt commented “The hardest part of making this expedition a reality, is getting to the start line. Resapol were one of the first companies to believe in what we were doing and became our biggest sponsor, not only providing financial support but also advice and networking, all proved invaluable and really projected our expedition to new heights. To have a company such as Resapol invest their time and money into an expedition that had never been done before, showed incredible belief and passion for what we were trying to achieve. A belief that I am honoured and proud to have gained. The support from Resapol allowed the team to develop the education programme and also focus more time towards raising money for Ocean Generation, a charity and cause that Resapol were drawn to as the global discussion around our climate and environment intensified.”

Over the course of their fundraising they have reached their goal and managed to raise a staggering £65,221, and you can still donate to either of these great causes as the JustGiving pages are still open.

And the journey didn’t stop there as the boat, having travelled across the dangerous North Atlantic, made the journey to Resapol Head Office in Leigh, Lancashire. The Resapol team were able to take a look at the boat and hear about Matt and the rest of the team’s experiences on the boat: “The team spent 71 days, 19 hours and 10 minutes at sea after setting off from Brooklyn Bridge, New York. Of the 71 days at sea, we spent over 24 days on para-anchor a large maritime parachute that sits in the water and stabilises the boat in adverse weather. We had gale force winds reaching over 65mph and waves the size of houses crashing onto the boat. The team lost a combined 11 stone or 70kg over the crossing and had to deal with severe chaffing and salt sores whilst living in cabins the size of an estate cars boot. Although conditions were tough onboard, there were some incredible moments; swimming 1000 mile from land in the middle of an ocean on a calm day is something very few people have done, watching dolphins play around the boat almost every day was magical whilst experiencing the sound of a whale blowing 10 meters from the boat was something none of us will ever forget. For myself, watching the sunsets and rises where I could focus on what I really thought was important in life, whilst enjoying the pure simplicity of those moments was addictive and incredibly special. The tough times are always overshadowed by the incredible moments, as time moves forward, the hardship is dimmed but the life lessons learnt, and experiences gained remain fresh alive at the forefront of the mind. It was an incredible experience, one where so much was learned and experienced and one that could not have happened without the incredible support from Resapol.”

It was truly humbling for the Resapol team to hear about the highs and lows of the team’s journey and learn about the challenges they may decide to take on together in the future. At Resapol we have been lucky be one of their key sponsors and follow their journey as it has unfolded, finishing on the 11th August at London Bridge in spectacular fashion. Thank you to everyone else who has supported the team on their journey – let’s see what they do next!