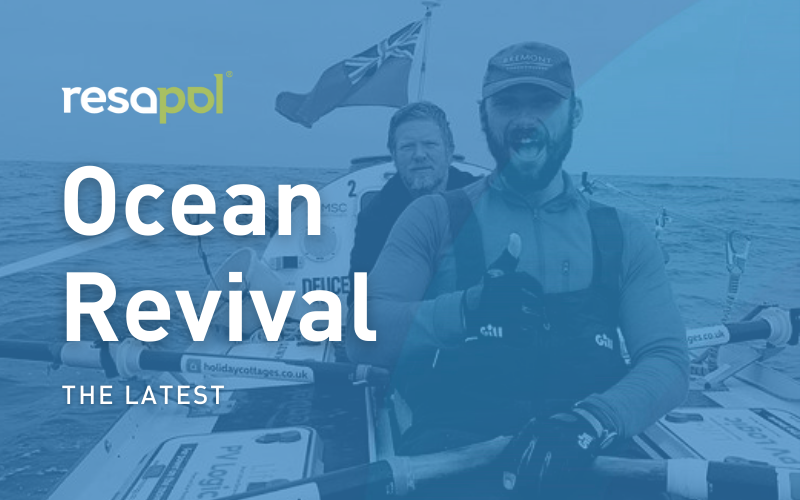 Did you know that there is now 5.25 trillion macro and micro pieces of plastics in our oceans? With our Oceans making up over 70% of the earths surface this is a huge area of our planet that it being polluted.

The Ocean Revival team of Royal Marines are currently raising awareness about the plastic destroying our oceans by embarking on an epic row across the North Atlantic of approximately 3,700 miles from The Brooklyn Bridge in New York City to Tower Bridge in London. They set off on the 31st May and have been battling their way towards their destination, on what is one of the most perilous journeys.

And they have certainly been battling with some bad weather over the course of the row so far, with their para anchor having to be deployed on a number of occasions. As described by the team the para anchor is a large water parachute that slows and stabilises the boat in dangerous weather conditions. Deploying the anchor means the team won’t be rowing but riding out the weather in the cabin, it has been essential in helping the team to maintain their position.

Despite the weather the team has experienced plenty of highs, with some amazing sunrises and sunsets, spotting a variety of marine life and most importantly watching the England teams progress in the Euro’s (yes, they have an internet connection out there!). You can follow the team on Facebook or Instagram to see all the latest videos from their life at sea and, most importantly, to send them messages to keep their spirits up. With the team now on the home stretch they are even more enthused by the thoughts of seeing their family’s and having a burger and of course a pint.

As we write the team are estimated to arrive at Tower Bridge around the 8th August, however this is all dependent on the weather conditions. This amazing feat has raised a great deal of money and awareness for such an incredibly important cause, plastic in our Oceans; it not only effects both marine and human systems, with plastic pollution contaminating not just seafood but also our water supplies.

But how does plastic end up in the Oceans?

Single use plastics (such as bags, straws, cotton buds, wrappers etc) now account for around half of the plastic produced worldwide and the majority of these plastics start in our rubbish bins. Whether the plastics end up in the regular bin (rather than recycling) or are discarded on the street, they can eventually end up in the Ocean. For example, if you put your empty plastic bottles or carrier bags in the regular bin it will end up in landfills, if it doesn’t blow away. As plastics are so lightweight they can end up being blown miles from where they were thrown away, most likely entering drains, then rivers, then ultimately the sea.

When it enters the ocean the plastic drifts with currents and winds before breaking down into smaller fragments, known more commonly as microplastics. It is these microplastics that can damage the sea life.

How can we reduce our plastic usage?

Awareness of the scale of plastic pollution is growing all the time, however it needs a huge worldwide effort to start to reverse the effects. There are a few simple steps we can take in our day to day lives which will help reduce the levels of plastic pollution:

There are lots of other single use plastics that we come across in everyday life that perhaps we don’t even consider could contribute to this, like dry cleaning bags and even cosmetics (some contain microplastics). Plastic pollution can be found everywhere and it is estimated that by 2050 there could be more plastic in our ocean than fish (by weight). From facts like this it quickly becomes apparent just how important what Ocean Revival are doing, and the cause they are promoting is something we should all be concerned about.

So please join us in following their progress and donating to this worthy cause by clicking on the below buttons: