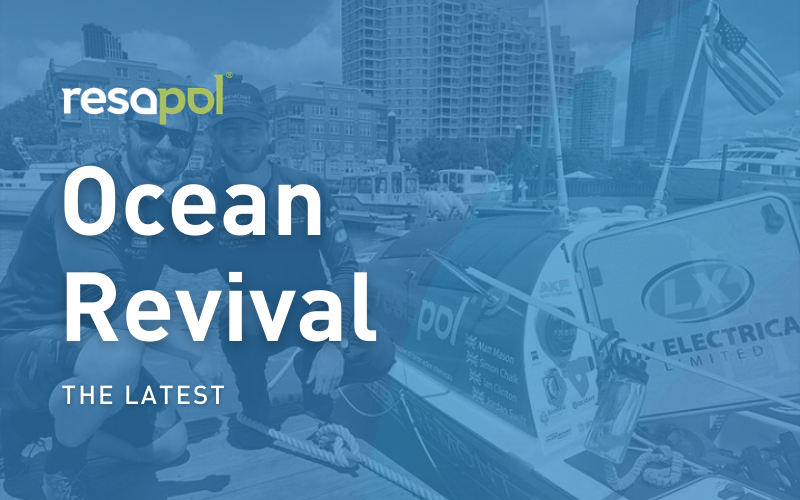 The Ocean Revival team successfully departed from New York on 31st May 2021 to begin the first stage of the world’s most dangerous row! The row takes the team 3,700 miles across the North Atlantic from New York to London and is in support of Plastic Oceans UK, the Royal Marines Association & the Royal Marines Charities, as well as helping to raise awareness about the dangers of plastics within our oceans.

The world produces 381 million tonnes in plastic waste yearly, and this number is set to double by 2034. This plastic waste often finds its way into our oceans resulting in the death of more than 1 million seabirds and 100,000 marine animals every year. There is now 5.25 trillion macro and micro pieces of plastic in our ocean, with the Great Garbage Patch (a huge collection of plastic and floating trash) now eclipsing the size of Texas.

Resapol became the main sponsors of Ocean Revival after meeting with the team to hear about their ambitious project. Since sponsoring the team, Resapol have also taken significant steps in order to use more sustainable work practices, including introducing efficient methods of waste management and moving all company vehicles to either hybrid or fully electric alternatives.

There was a real feeling of ground rush within the team as they made their final preparations for the row, ensuring safety checks and a full inventory of the essential equipment was accounted for before packing it in what will be the teams home for 70 days. The Ocean Revival have done a fantastic job in recent months, managing to manoeuvre around full time work and families to ensure that everything is as it should be before such a dangerous voyage.

A year late, due to that small glitch in the timeline known as COVID 19, the boat was successfully shipped over to New York via a 40ft container, arriving undamaged in April allowing the team to test it on the American waters for the first time. Due to COVID-19 and US inbound policies, the team had to also isolate outside of the UK and Schengen Zone for 2 weeks before then flying into the States to isolate for a further week. Once they had arrived in New York the next phase of the project began as they set up camp out of New Jersey in the vicinity of Liberty Landing Marina, which is where the boat was moored as the team awaited a suitable weather window before officially embarking.

Before embarking the team had been looking for a weather system that will help to push them South East for up to a week to get out and into the Gulf Stream. Ocean rowing can be made or broken by the weather and how the team utilises its effects; with often the hardest part being getting out of the blocks and away from land. The team successfully managed to effectively factor in a number of weather aspects before beginning their journey, with the most important being wind and swell. Both the wind and swell play a huge part in the speed, stability and safety of the boat which meant that the team initially experienced delays to their departure as they sought the optimal conditions.

The optimal conditions made themselves apparent on 31st May 2021, and the team successfully departed! The initial row involved the team heading out of New York, they will be rowing hard for the first few days in order to effectively escape the messy currents and wind created where land and ocean meet. This is also the hardest time for the crew as their bodies are adapting to being at sea and working hard with very little sleep. Anxiety, dread, fear, exhilaration and joy are all of the emotions that each team member will undoubtedly be experiencing as they battle both physically and mentally whilst pushing their bodies to their limits. After a week or so life on the ocean will become a new normal, as the teams bodies begin to adapt and the day to day rowing becomes easier as routines begin to become second nature.

Now that the voyage has begun the team will continue to utilise the ‘Windy App’, this app tracks the weather and the team will utilise it in order to determine the best route towards their destination. The team have also enabled the ‘Yellow Brick’ tracker that will update every two hours the teams exact position and you are now able to follow the team’s progress on both their official website (www.oceanrevivaladventures.com), as well as on the Ocean Rowing Societies website (https://oceanrowing.com). The team will also be posting daily update across all of the official Ocean Revival social media channels.

With the team officially beginning their voyage Resapol would like to say a huge good luck to the fantastic Ocean Revival team who are set to make history whilst raising money for some great causes, and shining a spotlight on the dangers of plastic in our oceans. Ocean Revival have so far raised a total of £57,187 towards Plastic Oceans UK, the Royal Marines Association & the Royal Marines Charity. If you’d like to further donate to these great causes, you can do so by following the below links: