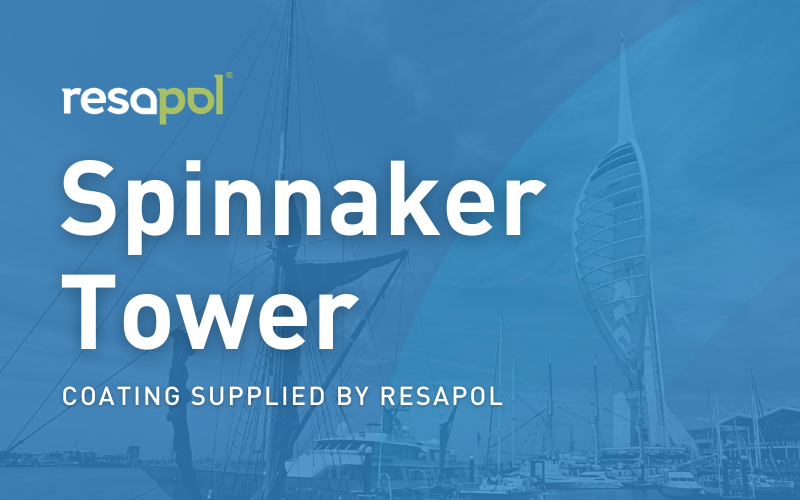 The iconic Spinnaker Tower is a 170 metre landmark observation tower in Portsmouth, a centrepiece of the redevelopment of Portsmouth Harbour. The towers design was originally chosen by Portsmouth residents and works to reflect Portsmouth’s maritime history through its bespoke design that is modelled and named after a spinnaker, a type of sail that balloons outwards. Following a commercial sponsorship deal in 2015 with Dubai-based Emirates Airline, the tower was commissioned to be repainted from white to blue and gold. The tower sponsorship was made as a way to promote the Americas Cup, which was also sponsored by Emirates Airlines and was held at Portsmouth in 2015. Resapol Southampton was on hand throughout the process in order to provide the perfect cost-effective solution: Intercrete 4891 (formerly known as Flexcrete’s Monodex Smooth).

Intercrete 4891 is a high performance water based, elastomeric, high build, decorative coating which provides protection against carbonation and water ingress, yet allows damp substrates to breathe. It is ultra-fast drying which enables two coat applications to take place on the same day and facilitates year round usage. These features made it the perfect material to utilise on the Spinnaker tower which, due to its size and location, is completely exposed to water and salt elements.

Intercrete 4891 also comes in a range of attractive colours, and a suitable blue and gold gradient was quickly selected with Resapol Southampton supplying the chosen materials direct to site, minimising disruptions to ensure the project was completed on schedule. In April 2021, the Emirates Airlines sponsorship deal officially came to an end and as a result the tower was commissioned to once again return back to its original white colour. Due to the fantastic service previously received, Resapol Southampton was once again able to provide Intercrete 4891 for the project.

On both occasions the recoating was completed efficiently and safely by The Abseilers, specialists in high access & safety building maintenance, who completed the project by selecting suitable days when the weather and climate allowed for safe working conditions.